Dosetec dosing system for the production of liquorice filled sweets

Fazer investing in liquorice in Lappeenranta

In recent years, Fazer has significantly renewed it liquorice line at the Lappeenranta plant. This has helped the company to develop the Fazer Liquorice product family, which has been influenced by the international liquorice trend. Dosetec delivered the extensive automatic dosing and weighing system for the manufacturing of the new product family as well as other liquorice-filled sweets.

Fazer has contributed to the Finnish liquorice tradition as a trendsetter already since 1927, when the classical 20 g Fazer liquorice bar conquered the hearts of the Finnish people for the first time. According to the company, liquorice is currently a rising trend in the world and especially in the Nordic countries. Fazer has wanted to introduce this trend in Finland and for this reason has developed a new Fazer Liquorice range in which liquorice is complemented by toffee, vanilla and salmiak. 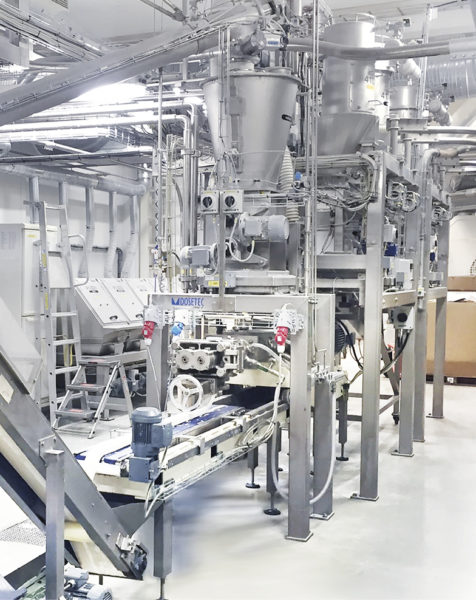 The new liquorice range is produced at the Lappeenranta plant with a liquorice line that has undergone significant changes in the past couple of years. The renovations have included a dosing system for the raw materials belonging in the liquorice filling paste. The continuous dosing system was delivered by Fazer’s long-term partner Dosetec, who not only automatized the powder and liquid dosing of liquorice filling paste, but also the dosing of raw materials into the syrup mixers. The project, which was carried out in autumn 2015, was rather extensive, since the new system covered the dosing of more than 20 raw materials. The production of Fazer sweets has now increased at a steady pace in Lappeenranta also during the economically challenging years. In addition to the new liquorice range, the new line also produces various liquorice filled sweets, from the fiery Tyrkisk Peber to the Angry Birds candy familiar from the gaming world.

The Production Manager Matti Huttunen of Fazer Sweets in Lappeenranta plant tells that the automatic dosing of raw materials has helped to achieve precision and reliability, which again have contributed to more uniform quality of the liquorice filling paste. The continuous precise dosing has been achieved by implementing various technical dosing and weighing solutions in one whole. For example, small components such as cocoa and salmiak powder, are dosed with loss-in-weight dosage dispensers that proceed from weighing. The continuous precise dosing of liquids is controlled by flow meters. “We have noticed a clear difference between the current and the old system. The equipment has functioned extremely well for the most part. Naturally, there have been some small challenges, but there is no such equipment that does not give any challenges during the commissioning stage,” Huttunen tells.

One of the challenges referred to by Huttunen concerns chili powder, which contains a lot of salt and easily absorbs moisture from the air. The powder cakes easily especially in summer, when the moisture content in the air is higher than in the winter. Dosetec solved the moisture problem by designing the system with a structure sealed to the highest possible level. The Managing Director of Dosetec, Olli-Pekka Rihu tells that the system passed extensive test-runs with chili powder in the premises of Dosetec in order to establish the best possible structural solutions. “We are extremely satisfied with the system. Prior to the project we discussed with Dosetec a lot and openly about all the potential problems. Our employees welcomed open-heartedly the renewal from the very start,” tells the Production Manager Huttunen.